On Tuesday 24th September, we had a fun collaboration day with North South Cowton. Walking into the classroom, I could see no one was there! Only a strange looking man named John, so I went into class one and found everyone watching a film and completing collective worship tasks. Suddenly, I heard a noise out of the window and I saw a large white bus. Slowly, a crowd of people walked out and into the school, just in time for Stone Age day to begin!

First, John introduced us to the Stone Age timeline, which was hanging on the wall. Then he showed some smooth wooden tools by holding them up in the air. He invited some people (including me) to come to the front and hold up some animals skins. John, who was wearing funny clothes, made us guess which animals the skins had come from. Then it was time for break.

After break, John, who was still excited, set the room up with large pieces of paper and pencils. John explained what we were doing-he said we had to draw and handle the artefacts from the stone Age and bronze age. We all got to see all things because we took turns and swapped things around.

I was starving-it was lunch time! Tucking into my jacket potato, I could hear the rain on the roof like a drum. Mrs Simpson, who was filming the raging rapids tumbling down the playground steps, began to look nervous. Suddenly, Mrs. Simpson did an ear-piercing scream! Water was seeping in under the door and into the corridor! Miss moved North South Cowton out of the room and into classroom 3. The keyboard-it was going to get wet, so Miss and I rescued it by moving it to the other end of the room-I was a hero!

After lunch we were handling and drawing more artefacts. First we got the coins with horses on to draw, then we got some bones; finally the flint and steel. After I had drawn the flint and steel, which was extremely hard to touch, I had a go at making sparks. “Ouch!” I exclaimed, unfortunately, I had trapped my finger, which was bleeding. I had managed to make some sparks though.

In conclusion, I had enjoyed a very exciting stone age day. John had taught us so many facts that my head was fit to burst! Handling the artefacts and sketching them was what I enjoyed the most. However, after the school flooding and cutting my finger, I was tired and ready for home. 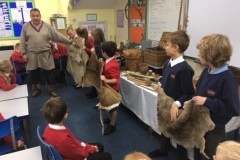 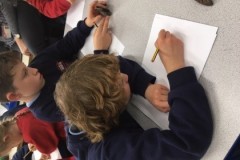 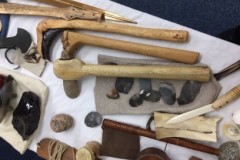 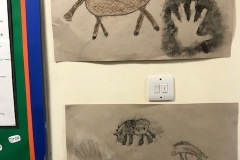 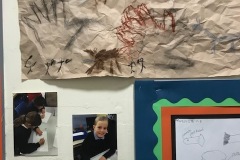 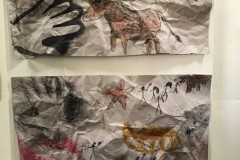 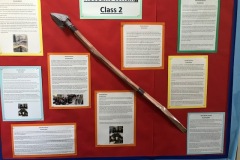 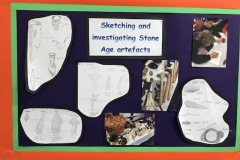